SPECIALIZING IN  KIDS AND ATHLETES

Feeling a little jealous lately --- another of my young actors has booked a great lead role in a film that shoots out of the country.  That makes two 'out-of-the-country' roles for my students this semester.  Very proud of my FaceTimers who have been booking films and tv this year; movies, several shows in LA and even a cartoon.  As for the old Coach, I'm back as Captain Andrews in 911 Lone Star (a great show btw), and will play Ed Sullivan in the upcoming film 'Remember Me'.  I am currently coaching athletes for a major series on HBO: "Winning Time".  What a pleasure.  As for auditions, we all know that good isn't good enough anymore. Just a few adjustments can make all the difference.  Let's do it.  Prices are reasonable.       BoKane60@gmail.com

Make your self-tape the best it can be! 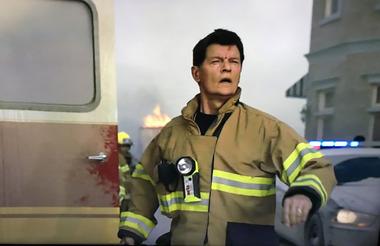 Bo Kane (above as Captain Andrews on 911 Lone Star) has coached young actors and athletes with private instruction for over 13 years, and he directed casting sessions for over 20 years (with over 100 different directors).  He has also acted in many tv shows, films and commercials (The Orville,Just Roll With It,  NCIS, Jane the Virgin, How To Get Away With Murder, Criminal Minds, Colony, Dexter, Castle ...) and is the author of "Acting Scenes and Monologues for Kids", and "Acting Scenes and Monologues for Young Teens".  He and his wife have two kids: their son has been on Coop & Cami, Henry Danger, Godless, Lethal Weapon, Criminal Minds, CSI, Goldbergs, etc. Their daughter is a film major and editor at UCLA.

In the pictures to the right you'll see some of our guests:  casting directors and sessions runners, actors, and an Emmy-winning director. 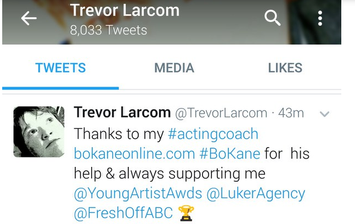 Approved by the State of California:  Epic, Inspire, and several other  charter schools.   CA # I193KAR640

"Bo Kane's classes for kids are the best in LA, and we've been to several.  They care about each student and bring in guests from all parts of the business."   --Tiffany, Madison's mom

"Our daughter has blossomed in this class, and has so much fun learning and doing  what she loves to do.   And she's had success ever since with commercials, theater and a guest starring role at Nickelodeon.   They care so much for the young actors ... it feels like we are coming to see family when we're there."                 Mindy, Tess' mom